The Most Consistently Profitable Trader Is Also The Best Loser

I saw this on a T Shirt recently –  “Second place is the biggest loser”. Most of us are indoctrinated against losing. We sing praises of those who overcome impossible odds, we hail the champions, and we immortalize heroes. In schools, at work, we battle to win, we do not learn to lose.   Resilience is that resonant voice that picks up our spirits, and girds us in the face of adversity.   But to do well in an activity, where losing is a common occurrence that afflicts performance, we must learn to lose well. In the sport of Judo we first learn how to take a fall safely, in cycling we almost always fall off a bicycle before we successfully ride freely, and in boxing, we learn how to take punches correctly to survive long enough to fight back.

How often does a trader lose?

Analysts at Dailyfx.com, drawing from 43 million trades between Q2 2014 to Q1 2015, showed a large incidence of losing trades amongst Forex traders (between 40% to 50% of all trades). (Illustration below from www.dailyfx.com) 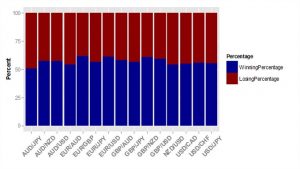 No doubt, losing is common in trading. Thankfully there were more win trades than loss trades – in fact, anywhere from 50% to 61% (EUR/USD) were winners across the 15 most commonly traded pairs.

Yet despite this optimistic observation, trading results showed traders lost more money than they gained ultimately.    The average number of pips lost for each losing trade well exceeded the number of pips gained for winners.   (Illustration below from www.dailyfx.com) 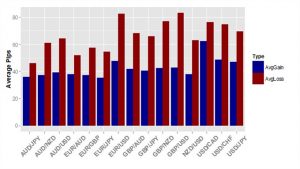 Why were the loss pips so much higher than the winning pips? Prospect Theory on risk behavior from Daniel Kahneman (Nobel Laurette) offers an intriguing explanation.

According to the theory,  we hate to lose more than we like to win.  This means if we have a choice between a certain probability of losing a sum of money (for example, 10% chance of losing $800), against a definite loss of a certain amount (say $50), we tend to try to reduce our potential loss or  even strive to turn a profit – we will not take the definitive loss even if the potential loss may ultimately cost us more.  A short term trader hanging onto a losing trade which ultimately becomes an unplanned long term investment, and various martingale strategies typify such an attitude. When we hit a winner, we do not let the trade run its profitable course.  Rather than wait for a higher prospective profit (and risk potential loss or profit erosion), we willingly settle for a concrete smaller profit, and perhaps shortchange ourselves on the full potential of the trade. Taking profits too early and the commonly accepted adage “you never go broke taking a profit” mirror this mindset.

So we hate to lose, we lose miserably, and we win miserly. That about sums it up.

Unless you have a superior edge like reliable insider knowledge or a magic crystal ball, losses in trading is inevitable. A consistently profitable trader must learn to roll with the punches on a regular basis like a boxer.   Only when we embrace this mindset, do we see the light for more rewarding trades.

When pursuing a proven strategy, we should not lose more than what is expected if the market turns against us – the best loser respects stops and entry limits.  To win masterfully, we need to let profits run. We can augment this by taking trades with reward risk ratio of at least 1:1 or better.  Dailyfx’s analysis of sample data concluded that 53% of the accounts operating on 1:1 ratio were profitable for a 12 month period, whilst only 17% operating on less than 1:1 reward risk ratio were profitable for the same period. This means a trader with at least 1:1 reward risk ratio is nearly 3 times more likely to be profitable than one who does not.   (Illustration below from www.dailyfx.com) 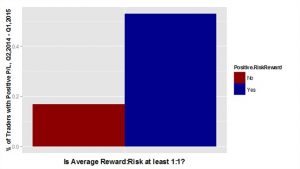 So we can summarize, a consistently profitable trader accepts regular losses, uses correct strategies with at least 1:1 reward risk ratio, respects stops and entry limits, and lets profits run.  Doing these,  he minimizes his losses and creates opportunities for more winning pips.

The caveat – not every trading opportunity permits use of these suggestions. As a trader, you have to filter through conditions, and identify strategies and market circumstances that allow  exploitation of these recommendations and know when they are inappropriate.  If for example, your trading strategy is based on 5 min charts with momentum bursts, letting profits run in a volatile environment may result in fatal whipsaw stop-outs instead. If your strategy is powered by a stressor edge (example – war claims leading to demand for safe haven currencies), which over time have diminished in severity, it then becomes unwise to wait for a predetermined reward risk target  to be reached.  If you deploy high reward risk ratio strategies in short term volatile environments, you may  have to contravene common consensus with a suitable position sizing plan that thrives on high frequency, repetitive opportunities and perhaps even amalgamate with an adjusted martingale formula.

So we cannot blindly impute any principle into a strategy without clearly understanding its potential limitation.  Such dogmatism is suicidal.  However, traders can choose to abandon strategies that do not sufficiently  accommodate the principles described in the findings.  That is perfectly alright.