A few days ago, my friend (a reasonably new trader) was lamenting over his losses and mistakes.  He felt miserable.  If not for his naturally glowing persona, I presume he would have fallen into depression.

I wish I could help him, but really I couldn’t do more than lend him a listening ear.  There is no secret to trading.  Whatever a trader needs to learn – head knowledge- is freely available at good sites such as Babypips, Dailyfx, Fxstreet, Forexfactory etc  The rest comes from practicing what he had absorbed intellectually.

This friend had lost a  sum that was significant to him – something that should not have happened if he had followed money management rules.  Though he had read up on money management, he just did not practice it conscientiously.

That is a depressive ordeal many starting traders go through – the inability to take losses/profits, develop and follow a trading plan, and practice good money management.  Many such traders believe they can wing it and make proper decisions on the run.  Such dismissive arrogance ultimately destroy their accounts.  They forget that in a trade, the mental processing edge is really limited, information absorption is scant, and that emotions convolute judgement.

I know a trader who said it took him more than 3 years to be consistently profitable because he was stubborn.

The sooner the young trader understands his complacent limitations vis a vis  shark infested markets, the sooner he can work on his success.

The Trading Plan Must Have These Components 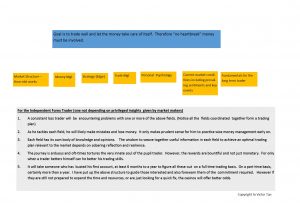